To my beautiful wife,


When I read 1 Cor. 13:1-7, I think of you.
I alternate “you” for “love” and feel the same.
You are patient, you are kind; you
believe all things, hope all things.
If I have faith, so as to move mountains,
but have not you, I am nothing.

Your love, you, mean so much to me,
so much more to me than anyone else of earth.
I cherish the minutes we have together
and the life we share.
May God grant us a long life as husband and wife
and His peace, through whatever trials we face,
because He has plans for us before we sleep.
He has given us many gifts already,
but the greatest is love.

A living Ansel Adams tableau
white birches stretching heavenward
over a winter scene of white on white
A monochromatic world too bright
for my eyes behind the photogray lenses
the black of the bark outlines edges
differences in the still wood
curls and sheets on the ground too
give depth and form, to add dimension
planes of space
preserved in my memory

A bright clear blue day in January
after a cold snowfall overnight
off the road, only glimpsed momentarily
as I drove by,
a Currier and Ives drawing,
a snapshot in my mind

A river, a brook really,
black water and snow covered stones
framed by pines
heavy with light snow
painted on the scene,
acrylic and oil paints
spread with spatula, knife
and fan brush

Among the pens and pencils
in my desk drawer
a piece of eternity fractured and frozen
brings me to that second,
that instant of force,
when motion ceased
an actor in the drama
of that time and place
sheared off
as surely as his life
was cut short

A long time ago, when I was young,
Back before I learned to respect
the realities of heat exchange
and the temperature of the Atlantic
in Northern New England, on the coast of Maine
my brother and I went swimming at Wells Beach

The day was in August,
sand burnt my feet,
the water was “refreshing”
until my feet went numb

Minutes later my lips were blue, my skin was white
before I turned red as feeling returned
to my extremities

We are all called
to step out of the boat
walk on the tightrope without a net
risk all by faith.
More than the call to “follow me”.
This is the singular call heard
by Peter alone of the twelve
the ultimate test
to focus on the master
amidst the noise of the winds
our own storms around us
that make us sink
without His father’s grace

How fast can your move backward
while in a crouched position
with your eye in the viewfinder
of a manual camera?
Faster than you would think,
when you realize an alligator,
who was your intended subject,
charges our of the water
up the bank at you,
at full speed. 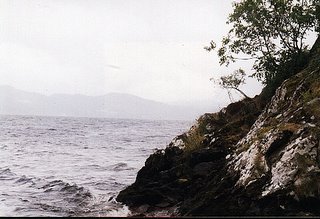 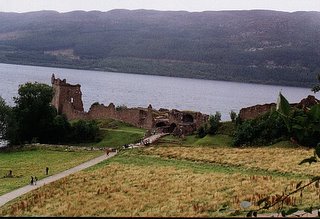 The ruins of red brick and stone
just above the surface of the loch
walk down to the shore, by the edge
I stared out into the mist
hanging over the water

She was out there, but invisible to me
I sensed her presence
hidden in the fog, of time,
the peated deep,
the enlightened “reality” of science.
How sad for us

Posted by Poetry Where You Live at 9:08:00 PM No comments: Links to this post

Small cottages followed, on the same plots
drawn year after year
to hear our faith, the transformation
the power of grace to save
saints and sinners alike

The MVCMA has held religious services and a wide variety of special programs on a continuous basis every summer since 1835. The unique character of the Campground, a heritage from a different era, has been preserved and treasured by generations of tent-dwellers and cottage owners for over 170 years. On April 5, 2005, The MVCMA was officially designated a National Historic Landmark by the U.S. Secretary of the Interior."

Surely we are a mere breath,
we are dust,
forgettable blades of grass
Our lives whispers, moments of time
in the mind of God
Grains in the continuum
of eternity
Our daily struggles
Meaningless, nothing
alongside infinity

Bags searched, cameras checked
eyes watching for more,
who is friend and who is foe.
A chill fell over the place
security more than sport
the sudden, urgent focus
so wrong but so true –
terror changed us all.